Well, I survived another one of THOSE days, Mother’s Day. A beautiful bouquet arrived on Frida 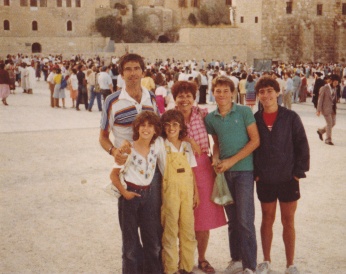 y. Assuming it was from Number One son, I snapped a photo and texted it to him with a thank you.  He called a few minutes later, laughing. “Not from me,” he said, “probably Louis, but Mom if no one claims them, I’ll say they were from me.  I can be Mr. Nobody.”

Now it was my turn to laugh.  Mr. Nobody lived in our home while my kids were growing up. Mr. Nobody ate the last of the cereal, all the hidden chocolates and finished the ice cream in the freezer. Mr. Noboby misplaced things, scuffed up the recently scrubbed kitchen floor, or chas v’chalila (that’s Hebrew for REALLY BAD) when the car was returned with a new ding.

I promptly called the home of my second son and spoke with my daughter-in-law.  “Yes, Louis sent them.  Wasn’t there a card?”

I texted the flower photo to her and she replied, “Lovely.”

Two hours later Louis, my second son, called, “So you called the house, why didn’t you call me?”

Did I detect a note of anger in my usually placid son? “I know you don’t like to be disturbed when you’re working.”

Two days later, on The Day there was the usual marathon of calls—first my daughter from Cheyenne, Wyoming who wished me a great day and complained about the weather. My local son, Louis called on Whatsapp and I got to see the whole family preparing to go on a hike for which I was not invited. My ‘sort-a-daughter’ (sorta rhymes with daughter in Brooklyn), Sheerli, called from Cleveland.  She’s not really my daughter but we have a great mom/daughter relationship, since we met when she was all grown up, starting her life and family, and there’s no baggage. Finally, my oldest son called. It was one-hundred percent.

Now don’t get me wrong, I love being a mother.  As a matter of fact, I’m often accused of ‘mothering’ people.  It’s not intentional. It’s just my nature since I care about others and their well-being. And yes, I’m free with ‘motherly’ advice—these days it’s “Be sure to wear your face mask,” or “Keep hand sanitizer in your pocket,” or “Make sure you don’t come close to anyone when you are out walking…”

My husband and I raised four wonderful independent children. Although my youngest child passed away in 2009 I still have much joy in my life from my offspring. Now, in the grandparent/sage years I feel especially lucky and blessed. My two grandchildren keep me going every day and motivate me to stay strong and healthy so I can continue to watch them grow up and kvell with their every accomplishment. I intend to make it to one hundred with this kind of motivation.

As a kid, my Dad made a big fuss over my mother on Mother’s Day. He presented her with a corsage and a special gift. Mom acquired an array of costume jewelry and fine jewelry, snakeskin and alligator handbags, and silk blouses over the years. I started shopping for my mother for her special day when I was in third grade—one year I bought her lace-trimmed handkerchiefs, another year a scarf, and once favorite toilet water. Of course, Daddy supplemented me.

In ninth grade, I went to Macy’s and ordered personalized stationery for my mother. What a bust.

“Gertrude Pearlstein, but I’d like Gert Pearlstein on the stationery, please.”

“Is your mother divorced?”

“When a woman is married we use her husband’s name. What is your father’s name?
“Louie.”

“Is it Louie or Louis?” she persisted.

“Louis,” I answered, “but my mother always signs her own name on things.”

“We’ll just do it the correct way this time,” said the clerk, as she pushed a pad in front of me.

Write down the correct spelling of your last name and your address, please.”

I did what she requested, checked the spelling, paid for the blue linen, monogrammed stationery, and was told it would be sent to our home in a few days.”

When the stationery arrived I intercepted it, wrapped it in some Mother’s Day packaging, and inserted a card. On Mother’s Day, I watched Mommy open the package and her jaw dropped. She never did use the stationery except for making grocery lists. In subsequent years I only gave her cards.

I couldn’t wait to be a mother myself.  I birthed my first child on April 20, 1965, and he survived for one week. Mother’s Day that year was a tearful occasion. I found no comfort from sympathetic efforts of comfort from my family. Finally, my husband, who was hurting as much as me, took me to our favorite Italian restaurant where I cried over the Chianti.

Subsequently, as noted above, I did become a mother. I thoroughly enjoyed every age and stage of child-rearing and seeing my children develop into the independent people they are today. Cluttering up my closets are spoon rests from fourth-grade sons and daughters, a collection of plastic decorated plates, and more recently a treasured stash of cards from my smart, beautiful grandchildren (doesn’t everyone have smart beautiful grandchildren?)

In recent years, however, especially since the death of my husband, Mother’s Day is bittersweet. As the children have gone on to live their own lives, I feel like the misplaced comma in a sentence. You can see it there, but it’s not quite where it belongs, thus the flowers—thank God no chocolates since I’m on my way to the Quarantine 15 and would have devoured every one of them—and the cards bring smiles to my face.  The phone calls are especially nice to break up the monotony of the long day.

It’s nice to be remembered. In reality, all my children call regularly and every time they do, it is Mother’s Day for me…so Bah Humbug to one day in May set aside for it.